This is the first time that within the very first week of Bigg Boss 11, the audience got to see a furious side of Salman Khan in the very first Weekend Ka Vaar thanks to Zubair Khan. The actor who lost his cool against the contestant over his misbehavior against women in the show is now in trouble. Apparently, Zubair has filed a case against Salman Khan.

Ever since Bigg Boss 11 started, the audience has not been able to keep to understand what is happening in the house as the contestants are continuously shouting, fighting & abusing. Amidst it was also being reported that Zubair Khan is not who he claims he is & Haseena Parker’s family is miffed with him for using their family name for fame. The complaint has been registered at the Lonavala police station of Mumbai. Zubair claims that Salman threatened him that he would not be able to work in the industry anymore once he leaves the house. The complaint further reads that Salman made statements like “I will make you my dog. Will see you after you leave the home.”

This week Zubair Khan was eliminated for receiving least number of votes. And since then he has been blaming names & rubbishing the show & the host Salman Khan. He has even filed a complaint against Salman with the Lonavla police station.Zubair claims that Salman threatened him stating that he would not be able to work in the industry once he leaves the Bigg Boss house. The complaint further reads that Salman made statements like “I will make you my dog. Will see you after you leave the home.”

For those who are confused as to what led this, Salman lost his cool at Zubair in Bigg Boss 11’s first Weekend Ka Vaar episode, which aired on Saturday (October 9). The reason behind Salman’s anger was the fact that Zubair has been repeatedly using inappropriate language in the house, especially against women. He has been threatening people to not upset him as he can be dangerous.

The Indian Express landed a copy of the complaint shared below. 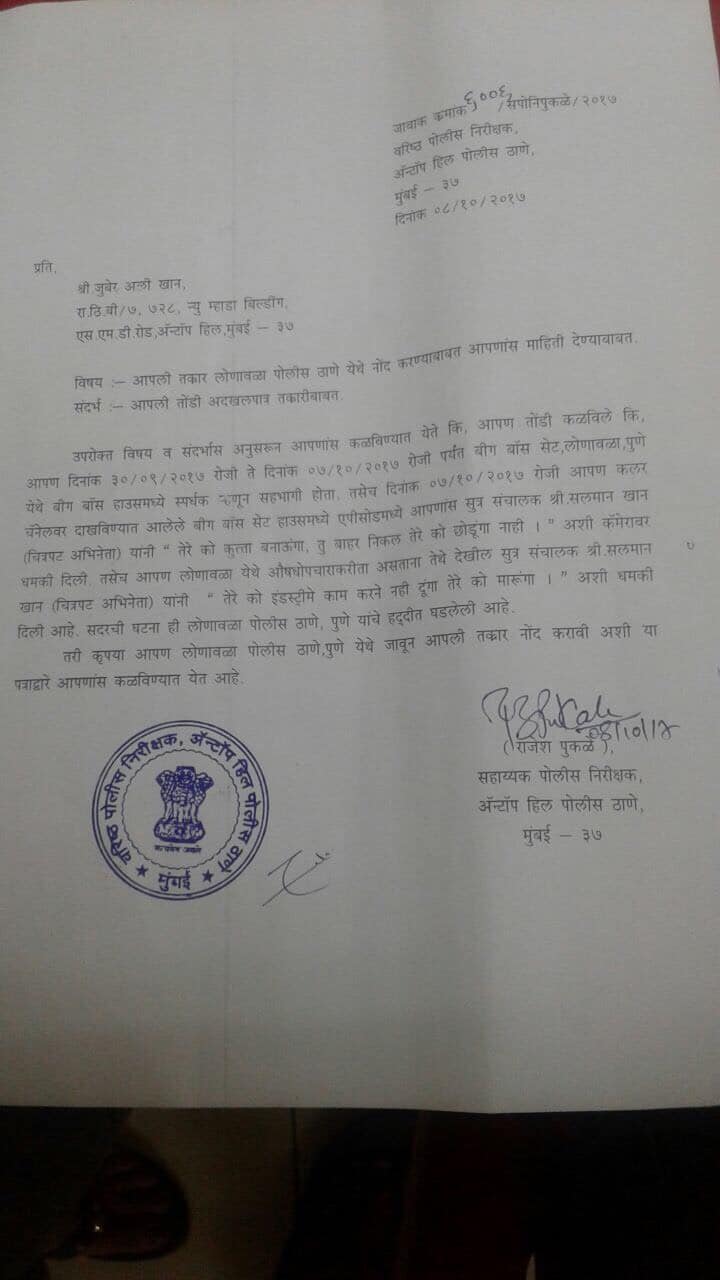 Zubair Khan, who claims to have a connection with Dawood Ibrahim’s family, left the Bigg Boss house on Sunday morning due to health issues. Bigg Boss had called him in confession room and was sent out with doctors. While Salman informed that he is recovering, it was only by the end of the show that he announced that Zubair got evicted with low number of votes in comparison to other nominations.
What do you think?

Get the best viral stories straight into your inbox!

Filmygyan is your lens to Bollywood's entertainment and music industry! Yes, we entertain you. But that’s not the only thing we do. We also bring a smile to your face and add that little dose of sunshine to your world every single day.